The video begins with Dimon alone in the mat room, In full judo gi, working out. Tin enters wearing a tank top, jeans and barefoot. Tin is not impressed with Dimon’s martial arts and challenges him to fight like a real man. Dimon says he’ll take on Tin any way, Tin says they’ll fight 3 rounds, the first wrestling, the second boxing, the third freestyle. Dimon agrees.

Cut to the first round. Both guys are in wrestling singlets and barefoot. They wrestle intensely, with Dimon mostly in control initially. Eventually Tin begins using low blows and dirty tricks to escape holds. After a while the guys pull the straps their singlets down to show their chests. Tin eventually gains control after a hard ball grab and begins to dominate Dimon. In the end Tin puts Dimon into a bearhug. Dimon struggles and Tin asks if he submits. Dimon says “Never!” Tin continues to squeeze Dimon in the bearhug until finally he passes out. Tin dumps Dimon on the floor and poses victoriously over the unconscious fighter, a foot on his chest.

Cut to the second round. Both guys are wearing boxing gloves. Ideally they’d both be wearing boxing shorts, but if they aren’t available, then they could both wear jeans. They are both shirtless and barefoot. They exchange punches to the face and body, each getting the chance to back the other against the wall and dominate them with a flurry of blows. After a few minutes Tin takes control, and begins to dominate. Dimon is knocked down several times, and becomes dizzy and punch drunk. Tin backs him into the wall with several punches, and is able to hit defensless Dimon at will. Tin asks if Dimon surrenders. Dimon says “Never!” Tin begins to punch Dimon in the gut hard and fast over and over. Finally Dimon submits “I submit! No more!” Tin stops and steps back taking off his gloves, allowing Dimon to collapse to the floor. Then Tin drags Dimon to the centre of the mat and straddles Dimon, raising his bare fist. “I gave up! No more! Please stop!” Tin just sneers “Never!” and begins to punch Dimon in the stomach over and over, then drives in one last punch, grinding his fist into Dimon’s gut until Dimon passes out. Once again Tin poses in victory over Dimon.

Cut to the third round. Tin is wearing mma style compression shorts or something similar, Dimon wears his gi pants and belt, both are shirtless and barefoot. Tin taunts Dimon “Are you sure you want to continue? You’ve already lost two rounds, there’s no way you can win.” But Dimon is angry and determined. They begin to fight, a mixture of striking and wrestling. Tin is cocky and overconfident. Angry Dimon quickly delivers several brutal kicks, then performs a judo throw. While Tin is stunned on the mat, Dimon delivers a hard axe kick to Tin’s groin. From here on Dimon dominates Tin brutally, with hard kicks, punches, stomps, low blows and throws, and putting him in humiliating wrestling holds, including a spladle. Eventually Tin submits, but Dimon continues his onslaught. At one point Dimon bearhugs Tin saying “Remember this?” Eventually, Tin is on the floor unable to stand. He begs Dimon to stop, but Dimon kicks, stomps and tramples Tin’s stomach in revenge for round 2. Dimon then begins to trample Tin’s face. Again, Tin tries to submit. “Who is the better fighter?” “You are the better fighter.” “Who is the loser?” “I am.” Dimon stomps Tin’s face again. “What are you?” “I am the loser.” “Yes you are.” Dimon then places a foot over Tin’s mouth, smothering him. Tin struggles for a while before passing out. Dimon slaps Tin with his foot a few times as he flexes and kisses his bicep. 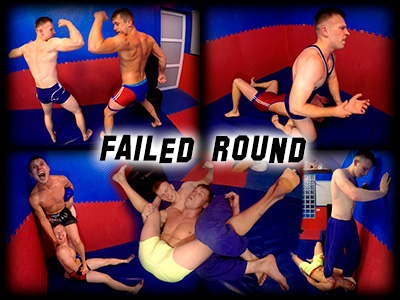