Our friend Sany has been the constant in all our Scissor Games films and we now come full circle: in our 10th anniversary film he meets again the formidable Rambo whom he met in the very first of our successful Scissor Games series. The same customer has sponsored all ten films but he has now decided that the way should be opened to other scissors fans: maybe youíd like to commission further films in this popular series.

“My legs are strong: come to Kyiv and try my headscissors,” says Sany; “I am the king of headscissors.” Yes: Sany has proved this time after time! But in this tenth film the headscissors are SO long and SO tight ñ from both fighters. Our two scissors specialists respect each otherís skills and the scissors are formidable. They both look so good in their white shorts. And, of course, we all know how strong these two boys are. Maybe someone should commission a free-wrestle film with Sany and Rambo! Who dominates this time? We won’t tell you! 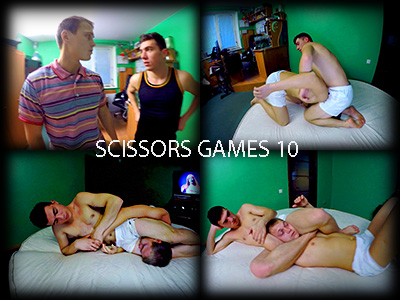