Custumer Order Instructions:
I’m excited to see a sale on custom matches and excited to see Nick in more matches! I’m interested in getting a 3-person, 25-30 minute, category-3 match if that is also 50% off. The match will be similar to my other matches with a focus on ankle locks and foot locks, with Nick getting dominated by Gus and Jim. I’ll write up an outline and send video and picture references later today. ... Nick and Jim are stretching in preparation for their match, Gus is the referee and signals for them to start. The first 2 minutes are hard fought grappling between Nick and Jim. Nick gets Jim pinned for the three count, then they move back to their starting positions. Gus whispers something to Jim right before the match starts up again. Now, Jim goes for Nick’s foot, focusing his holds on his foot and ankle. Nick fights back and eventually gets his foot away from Jim. Gus whispers something into Jim’s ear again, which upsets Nick. Nick comes over and pushes Gus. Gus gets angry and yells at Nick, tells him that he’s the referee and he’s in charge, then Gus tells Jim to sit on Nick’s back and put him in a choke hold. As Nick is in the chokehold, Gus comes around and grabs Nick’s foot, placing him in an ankle lock, cranking on his foot every few seconds, bending his sole. Throughout the rest of the match, Nick tries hard to fight back, but one guy keeps punishing his upper body while the other tortures his foot and ankle, changing positions every few minutes, sometimes both of them twisting his feet. Eventually, Nick tries to submit and quit, but the bullies won’t let him, covering his mouth and mocking him that they can’t hear him, threatening to break his foot off. Throughout the match, Nick will be trying to get Gus and Jim off of him, and if he is able to, Gus and Jim will overpower him again and again. Nick’s feet and ankles will be the main target, while the other wrestler will keep Nick from getting up. 2/3 of the match, Nick will be wearing the white Adidas or red Puma taekwondo shoes, while the last 1/3 of the match will have Nick in black no-show socks. Nick can also wear a singlet if available, or just shorts. Gus can wear a ref outfit if there is one, or whatever works. Jim can wear a singlet or gym clothes, both Gus and Jim should have boots or shoes. 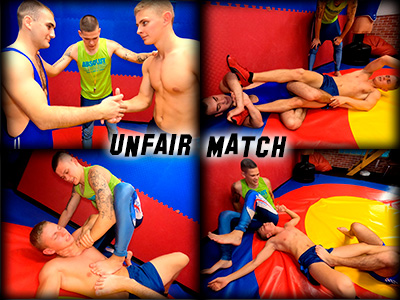