Custumer Feedback:
Thanks, it looks great! Both guys did a great job.

Custumer Order Instructions:
I have thought and would like to order another 30min match between Gorazio and Dimon. The match would be a direct sequel to the first. It begins much as the first ended, with both fighters wearing just gi pants, with Dimon knocked out on the mat. First ~10 mins:Gorazio picks Dimon up and uses one of their belts to tie him to the ladder in the middle of the room with his hands above his head. He wakes Dimon up, then begins to use him as a punching bag. punching, kneeing and kicking him, including low blows. I'd like a mix of quick hard hits, and slower close-ups showing Gorazio's feet pressing against Dimon's body and face and his fist grinding into Dimon's stomach. Dimon tries to be tough, but after a few minutes begins to plead for mercy. Gorazio ignores him at first, hitting him a few more times, before finally letting Dimon free. Dimon collapses to the mat and tries to recover, but Gorazio continues to kick him while he is down. Dimon becomes enraged, grabs the belt that is lying on the floor and uses it to choke Gorazio. Gorazio struggles but begins to fade, Dimon removes the belt and puts Gorazio in a sleeper hold until Gorazio goes limp. Dimon dumps Gorazio on the floor, and begins to kick and stomp on him, but it quickly turns out that Gorazio faked being asleep and he begins to fight back. Next 10-15mins: A brutal fight, both fighters determined to destroy the other. The fight should be a back and forth with each one dominating for a few minutes, then the other gaining the upper hand, and so on. Both fighters should use a mixture of strikes and grappling. There are some holds I definitely would like to see, in any order: - Gorazio puts Dimon in a triangle choke. - Gorazio chokes Dimon with his foot on his throat pinning him against the wall. - Dimon bearhugs Gorazio. - Dimon puts Gorazio in a boston crab. Last 5-10mins: In the last part of the fight, the winnner delivers a brutal low blow (or series of low blows) to the loser. I'd like it to be a surprise who wins. The loser finds himself helpless to resist as the winner tortures him with painful, humiliating holds and harsh blows. Eventually the loser begins to beg for mercy, but the winner keeps on going until finally the loser is knocked out cold. The knockout could be from a choke or a kick to the head. The loser is spread eagle on his back in the middle of the ring. The exhausted winner poses over him, pressing his feet to the loser's body and face and flexing his muscles. Finally the winner leaves, and the match ends with a long pan over the unconscious loser. 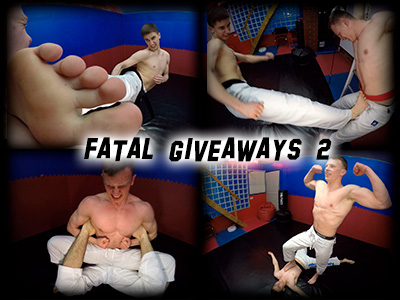