Custumer Order Instructions:
Marat and Rob are training. The first few seconds are Marat practising a sleeper hold; Rob seems to be giving advice. They then take turns hanging off the pull-up bars with a wide grip while the other punches their abs. Rob drops down early, saying that Marat is punching much harder. Marat find this funny. He lifts Rob's top to his neck, calling his physique 'skinny'. Annoyed, Rob slaps his hand away and says that he isnít skinny; there's just more to being strong than just having big fake muscles. Marat isnít impressed. Frustrated, Rob delivers a powerful surprise gutpunch then puts Marat in a sleeper-hold that leaves him unconscious. Marat has been tied stretched out (see previous image reference). His singlet has been half pulled down so that it sits around his waist. Rob wakes him with some light, playful punches. Marat angrily tells Rob to let him go. Rob says that all Marat's muscles are totally useless now. Rob does some gutpunching, both light/fast and hard. Marat looks tired for a moment, but then laughs and mocks Rob's weak punches. Rob says that they're only just getting started: heís tired of not getting any respect, and he wants Marat beaten and humiliated. Rob pulls Marat's singlet down, leaving him in the red speedos. Rob finds this funny and mocks him while playing with the waistband. Marat is annoyed and humiliated at first, but then defiant. Rob gutpunches him for a while. A few side punches/a ball grab. Rob goes behind him, we see his fingers come from behind and rest in Marat's armpits. Rob asks if Marat is sensitive, and Marat shakes his head. Rob tickles his underarms, and then up and down the sides of his torso. Marat laughs and struggles, but he can't get away. Rob tickles him from behind some more before gagging Marat with tape, saying that heís too loud. He finds a feather and tickles Maratís torso, again saying that his muscles are useless. He asks if Marat is ready to admit that heís weaker. Marat is defiant. Thereís then a lot of torture: gutpunching, tickling (from the front), feather tickling, a ball grab, nipple torture, then finally a powerful knee to the gut. Marat is apparently KOíd. Rob mocks his victim, then unties Maratís legs (removing the singlet) and his arms. Once free, Marat jumps on Rob and applies a sleeper hold, saying that the skinny guy is in trouble now. Rob struggles, but is left unconscious. Rob is now tied in the same position, wearing the flag briefs. Marat (now wearing tracksuit bottoms) wakes him, mocks him for being captured so easily. Marat also makes fun of what heís wearing, playing with the briefs waistband. Rob asks what happened to his clothes and tries to struggle. We see on his face that he realises he screwed up and heís in for some torture. Having a great time, Marat does all of the things Rob did to him, in a random order: gutpunching (more of this than the others), tickling, feather tickling, couple of ball grabs, gagging halfway through, nipple torture, telling him to admit that heís weaker. Finally, Marat asks him if he gives up, but Rob, though exhausted, refuses. Impressed, Marat admits that Rob is stronger than he thought. He places the feather into Rob's briefs waistband. Patting Robís abs, he says that they need to do this again sometime, since he's so much fun to torture and it might help him buff up a little. Marat gives one final powerful gutpunch, pulls off the tape gag, puts on his shirt and leaves the room. Rob gives one long pull against the ropes, but still canít get free. The last shot is of Rob smiling to himself, as if he knows heís beaten this time, but is still going to get some payback.

Huge Custom with our ripped Marat and Rob 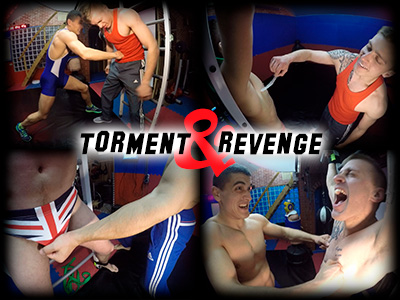 You're viewing: Torment and Revenge $77.00
Add to cart